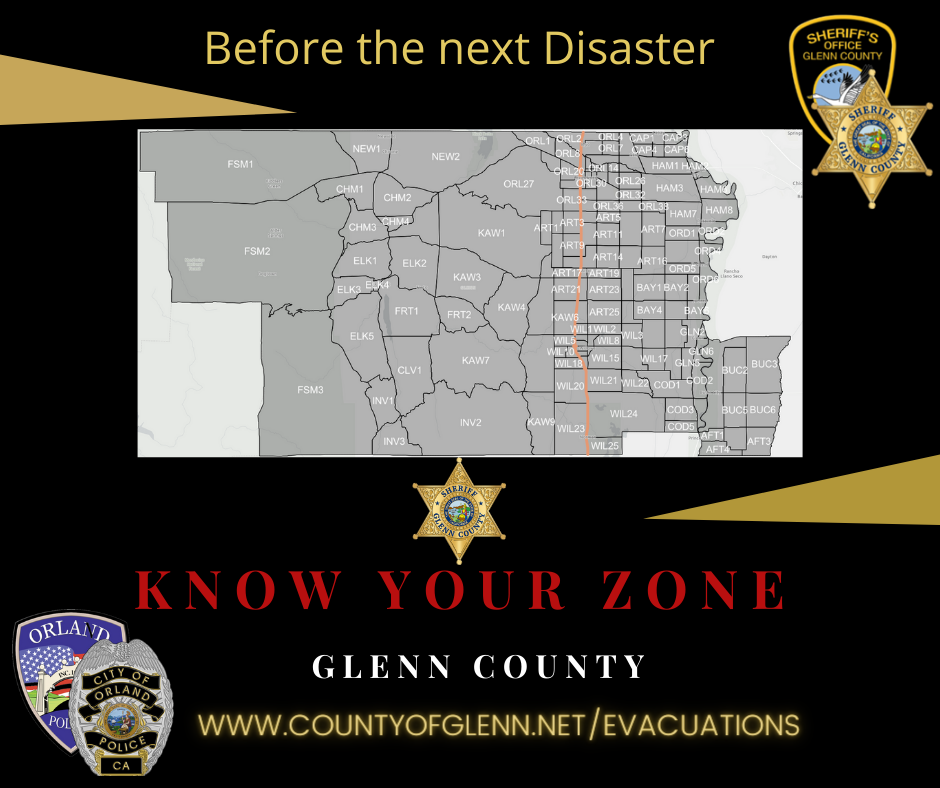 Each zone includes a description of the borders which are roadways, water ways, or county line. The zones are available in a spreadsheet format online that includes zone name and a description of the zone borders. Additionally, an interactive GIS map is available online at www.countyofglenn.net/Evacuations . This map includes an interactive address search for resident to easily identify their zone. When an individual zone is selected, a description of the zone with the zone's name, borders, status, and some additional information will appear. If the zone is activated for evacuation order or warning, or for shelter in place, it will be announced and Evacuation Status will appear on the Zone Table. An active evacuations map is under development and will be available on this webpage soon. Residents are encouraged to be prepared for any disaster and to know their community designation and zone number before a disaster occurs.

This was a cooperative project led by Glenn County Sheriff’s Office - OES with the assistance of Glenn County Planning and Community Development, Orland Police Department, and the fire departments of Orland, Willows, Artois, Bayliss, Butte City, Capay, Elk Creek, Glenn-Codora, Hamilton City, Ord-Bend, and Kanawha. The zones were developed based on knowledge and experience of first responders with roadways, hazards, historical impacts, previous evacuation orders, fire district boundaries and other contributing factors. These zones have been uploaded into the Sheriff’s Office CodeRED emergency alert system for use in geo-targeted emergency notifications during emergency incidents.